Republic Insurance Company Limited (RICL), a licensed general insurance company, was set up by the Chairman of Karnaphuli Group as the lead Sponsor in June 2000.

Republic is now a listed company in Dhaka Stock Exchange after a successful public floatation in which the shares were oversubscribed twenty two times, a reflection of its high standing and ranking among the company invested.

It currently has 13 (thirteen) branches within Dhaka City and the following branch offices outside Dhaka:

With expected growth in business and increase in geographical coverage/spread of RICL, further branches are in the pipeline. 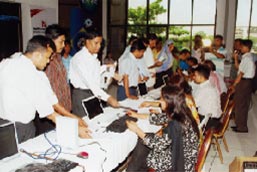 Bangladesh, a land endowed with rich natural resources and a deep-rooted cultural heritage has been steadily improving her socio-economic conditions since its independence in 1971. To bring her economy in line with other developing nations, it is continuously improving and implementing various monetary and fiscal policies.

Various important steps towards financial reforms were initiated by the Government of Bangladesh to bring its economy in line with global expansion of the free market and international trading in the last two decades. To streamline the financial sector, the government introduced the Financial Institutions Act 1993. As a result, a healthy and stable atmosphere has been created, allowing private sector finance companies to operate smoothly and profitably, in the emerging economy of Bangladesh.

The scenario in the specialized finance institutions and banking sector in providing adequate and medium to long term industrial credit has certainly increased the prospects of lease financing in Bangladesh. Growth potential is evident from the fact that the yearly leasing industry increased significantly in the past twenty years, when compared with other countries in the region. GSPB is committed to enhance the contribution of Fls towards a sustainable industrial development by participating in the areas of lease financing, merchant banking and other financial services.

All these have taken place in the backdrop of an increasing demand for a more developed financial sector with more financial products to cater to the needs of increasing private sector investments. The Government's liberalized investment policy together with the promising resources of the country has been attracting investors from all over the world.